Melatonin Benefits & All You Need to Know about Melatonin Sleep Aid

We’re always trying our best to catch up on sleep, whether it’s taking naps in the middle of the day, or thinking about skipping work for the day to sleep in.

Sleep affects so many different aspects of daily life, from our physical, mental, and psychological health, to our ability to function on a day-to-day basis.

However, we have yet to fully understand just how much sleep health influences those processes.

We have to start somewhere, right?

Let’s take a look at what is called the “sleep hormone”: melatonin.

Melatonin is a naturally occurring hormone.

It is produced and secreted by the pineal gland, a small endocrine organ located in the brain’s center. For most people, the pineal gland will be inactive during the daytime. In the nighttime, while your body is in a dark environment, it actively begins to produce and release melatonin for sleep. From there, melatonin is gradually released into the bloodstream.

Countless studies have shown that melatonin has many sleep benefits:

Factors that Affect Your Levels or Production of Melatonin for Sleep

By now, you may be wondering:

The normal production of melatonin for sleep varies significantly between individuals, although there are several factors that may influence it. Children typically will have higher levels of melatonin in the bloodstream than adults. Generally, with increasing age, you will produce and release lower and lower levels of melatonin.

What about other factors?

Your diet may also directly and indirectly influence the pineal gland’s ability to synthesize and secrete melatonin.

But how does that work?

In order to understand that, it’s important to first look at how melatonin is synthesized in the body.

Your diet indirectly influences melatonin in that some of the vitamins and minerals that you get from the foods that you eat act as cofactors and activators for enzymatic reactions. These reactions help form tryptophan, the precursor to melatonin, and serotonin, the “happy hormone” intermediate in melatonin production.

You can also eat foods that are rich in melatonin itself, such as:

Melatonin has many health benefits related to sleep and the overall functioning of the body. One such benefit is that melatonin helps increase the levels of glutathione in the muscle, liver, and brain tissues.

Glutathione is a naturally occurring and powerful antioxidant that is crucial to combating oxidative stress and damage in the body, as well as boosting immune function. Recent research has indicated that the body is able to naturally produce more glutathione while sleeping. Additionally, researchers have found evidence of a positive correlation between higher glutathione levels and better sleep.

This presents a cyclical effect in which: 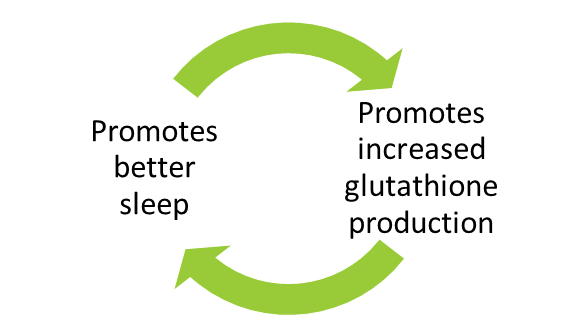 Numerous animal studies have shown that sleep deprivation leads to a significant decrease in glutathione levels. One study published in the Progress in Neuro-Psychopharmacology and Biological Psychiatry journal in 2012 focused on the effects of primary insomnia, now known as insomnia disorder, on certain biomarkers of oxidative stress.

Biomarkers are used as an indication that a biological process in the body has taken place or has started.

So, what did this study examine, specifically?

It was shown that patients with primary insomnia had significantly lower levels of glutathione peroxidase activity, and higher levels of malondialdehyde. The researchers concluded that sleep plays an important role in reducing oxidative stress. Another study published in The FASEB Journal focused on whether the antioxidant properties of melatonin were sufficient to maintain glutathione homeostasis that counteracts oxidative stress on a mitochondrial level.

Homeostasis is a self-regulating process to keep a state of balance and equilibrium, despite constant disruptions. It was in this study that it was shown for the first time that melatonin regulates glutathione redox status in brain and liver mitochondria. It does so by correcting it when oxidative stress disrupts it.

You may be wondering:

What does this all mean?

Redox status refers to the balance or equilibrium of oxidants and antioxidants. A disruption in this balance that leads to an oxidized state is what causes oxidative stress. What this means is that melatonin helps prevent the loss of intramitochondrial glutathione, and decrease oxidative stress and damage.

Additionally, melatonin was shown to cyclically stimulate glutathione peroxidase and glutaredoxin activity, which regenerates glutathione to be used by the mitochondria for other antioxidant processes.

Glutaredoxins are redox enzymes involved in combating oxidative stress.
Below, you will find a diagram of this cyclical stimulation of glutathione peroxidase and glutaredoxin activity:

Melatonin also helps improve mitochondrial function by detoxifying hydroperoxides, such as hydrogen peroxide, much like glutathione does.

That all sounds good, but what about studies on melatonin for sleep?

There was a meta-analysis done to investigate the efficacy of melatonin in improving different parameters of sleep in patients with primary sleep disorders, such as insomnia. Nineteen studies involving 1,683 subjects were included in the meta-analysis.

It was found that melatonin significantly reduced sleep latency, which is the amount of time it takes to fall asleep after the lights have turned off, and increased total sleep time. Additionally, there were no significant effects observed of trial duration and melatonin dosage amount on sleep quality.  Overall, the participants who took melatonin for sleep had significantly improved sleep compared to the control group participants who were given placebos.

If you are looking for ways to increase your blood levels of melatonin for sleep, you should consider a melatonin supplement.

More specifically, you may want to do some research on liposomal technology.

Liposomal Technology uses micro-sized fluid-filled liposomes to protect and deliver nutrients directly into the cells and tissues of the body.

These liposomes are very similar to human cells, which makes it easier for them to be transported within the body. As a result, nutrient absorption is greatly increased, and there is less intestinal discomfort than with using standard oral supplements.

Why You Should Consider Melatonin Supplement?

Melatonin for sleep has many benefits, ranging from its antioxidant properties to increasing the production of glutathione for better sleep.

Above all else, melatonin has been shown to have many sleep benefits, such as helping you fall asleep faster and for longer.

You should take the necessary steps to keep your levels of melatonin in a healthy, normal range during the nighttime for overall better sleep quality.